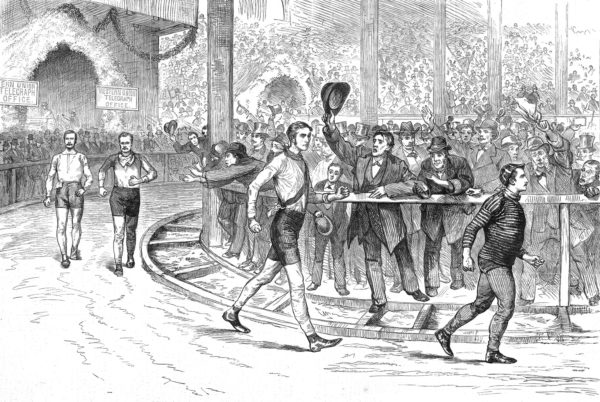 Today – the first Wednesday in April – just so happens to be National Walking Day. It’s a timely marker of an activity that many are turning to in these days of social distancing. Walking, that most basic of transports, is not only good for you physically – lowering the risk of heart attack and stroke – but mentally too. I would suggest that, as entire cities, states, and countries are in the midst of stay-at-home orders, walking should now be considered an essential outlet for busting stress and anxiety, allowing for self-reflection and offering a little bit of perspective.*

In light of all that, I’d like to introduce you to the term “Pedestrianism.” It really just means walking, or being a pedestrian, but it was also the 19th century precursor to what is called racewalking today; competitive walking over long distances. The early spectator endurance sport was something of a craze in the 1870s and 1880s, with competitors walking around and around arenas for as many as 600 miles in six days, 21 hours a day. People would flock to watch, place bets, buy pickled eggs, and just be seen at the events. There were brass bands, and scandal aplenty too, including early iterations of doping using coca leaves (a natural stimulant used to make cocaine, chewed in its leaf form). Counterintuitively (to say the least), it was perfectly legal to drink booze while walking. And the choice of drink was not any old alcohol – champagne was considered a stimulant and endurance walkers would consume a lot of it. Interestingly, although it was a spectator sport with some athletes gaining real celebrity, the term seemed also to apply generally as a term meaning traveling on foot – i.e., walking.

When I find out about a term like this, my first instinct is to search it on the Colorado Historic Newspapers Collection to get the word of the day on the matter. CHNC is a window into history, and it never disappoints. Some highlights:

The Colorado Daily Chieftain, March 12, 1879 edition reports on a race in New York.

…11 P. M.—Over eight thousand persons witnessed the walking match tonight. Intense excitement prevails. Rumors are in circulation that O’Leary is breaking down but his friends deny them and say that his condition is improving. He looks sick and has lost his old elastic tread. He made several brilliant bursts during the evening and showed some fine speed. He out-walked Rowell running and the applause was very hearty. Harriman shows fine style and endurance and is pushing Rowell closely. The rumors that Rowell’s right leg was cramped and stiff were denied. Betting tonight was four to one against O’Leary. Rowell ran at a lively gait during the evening. He was presented with a large boquet during the evening. Harriman walks in splendid style and gains ground rapidly.

The article ends, almost needlessly, with: “It is reported that Rowell has several painful blisters on his feet and his calves are swelling badly.”

The Golden Weekly Globe’s August 5, 1876 edition talks about pedestrianism not in terms of competition, but as it’s potential to be a pleasurable pastime and a means of a sort of vacationing – and the reasons that “our people show no special fondness for pedestrian excursions.”

The most confirmed pedestrian demands certain conditions for a journey on foot; there must be good roads, attractive scenery, comfortable inns, ere he will put on his walking-gaiters and take up his staff. Two of these requirements America does not possess. Our wayside inns are commonly whited sepulchers, which all men enter with misgivings, and our roads are constructed as if pedestrianism were an unknown art. One who undertakes a long journey on foot with us knows in advance that much of his jaunt must extend over roads cut up with deep ruts, without footpaths at the side, for the most part unprotected from the sun by shade-trees, covered with loose sand, that with every passing vehicle or every puff of wind rises in clouds of dust, and with miserable taverns for resting-places at long and uncertain intervals.

The article lifts its tone towards the end to a romantic sort of optimism.

Under a dispensation of good roads we might come to see the fixed National habit grow up, as in Germany, whereby every youth would be understood not to have completed his education until he had explored on foot the by-ways and rural places of the land.

By 1908, with the advent of the automobile and the rise of other more enduring spectator sports, pedestrianism was considered long dead.

I say bring back pedestrianism. So, make sure you get outside today – stretch your legs, take in some fresh air, and if you make it a long walk, don’t forget the bubbly.

*Of course, follow your local government’s directions on the issue, but in Colorado walking for exercise is currently permitted.

Thanks to Babi Hammond for the tip.