The Colorado State Library (CSL) and History Colorado (HC) are excited to announce the addition of the first 15 years, 1976 to 1991, of OUT FRONT Magazine to the Colorado Historic Newspapers Collection (CHNC).

OUT FRONT Magazine (OFM) is a bimonthly publication for the lesbian, gay, bisexual, transgender and queer (LGBTQ) community published in the Denver metropolitan area. The print edition is distributed in many large metropolitan areas—from New York, Pennsylvania, Washington D.C., and New Jersey to Utah, Wyoming and California. Remaining operational and relevant at a time when so many independent publications have ceased operations, OFM has the distinction of being the second-oldest independent LGBTQ publication in the United States and the largest in the Rocky Mountain region.

History Colorado is honored to be part of this amazing opportunity to partner with the Colorado State Library to bring OUT FRONT to CHNC. This continues History Colorado’s mission to make Colorado newspapers accessible so that many generations will be able to look back on the incredible people and events that helped shape the Centennial State. – Aaron Marcus, Gill Foundation Associate Curator of LGBTQ History at History Colorado.

The first issue hit stands on April 2, 1976. Phil Price, a student at the University of Colorado, launched the newspaper out of his parents’ basement when he saw the need for a publication that gave voice to the LGBTQ community after the Stonewall riots and in a society that had long persecuted sexual minorities. OFM was one of the first publications to report on the AIDS epidemic after that story broke within the gay community of Los Angeles in June 1981. In the ensuing years, as mainstream publications reported fewer and fewer stories about the epidemic, OFM remained a vital source of reporting about all aspects of the disease and served as a unifying force within the LGBTQ community. 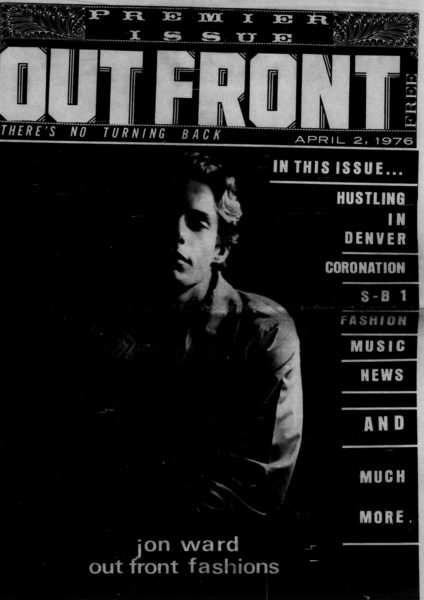 After the 1992 passage of Colorado’s Amendment 2, denying equal rights in housing and employment to LGBTQ people, OFM was there with in-depth coverage through 1996, when the U.S. Supreme Court overturned the measure. For forty-four years, OFM has remained the most in-depth news source in the Rocky Mountain region covering the most important stories impacting the LGBTQ community, including the Mathew Shepard killing, “Don’t Ask, Don’t Tell,” marriage equality, and many more.

Prior to these issues being added to the CHNC, the full run of OFM was only available on microfilm at certain institutions. Although the CHNC gives access to numerous titles from Denver, LGBTQ representation is lacking in breadth and depth, resulting in significant missing pieces of our state’s history. We, CSL and HC, believe that OFM will provide a perspective on Colorado that cannot be found in other newspapers, and will be invaluable to students and researchers searching historic newspapers and those researching the LGBTQ community.

Addison and Maggie Phillips are the first female owners of the magazine and OFM is one of just a few female-owned LGBTQ magazines in the country. Addison had this to say when asked about the significance of the time period now available in CHNC.

I’ve seen more inclusion in our pages than maybe in some other publications and media back in the seventies and eighties. […] That whole period is super important to preserve because of the history of the AIDS crisis and civil rights for LGBTQ people. Before OUT FRONT was officially a magazine, it was an illegal zine because it was still actually illegal to give out information about LGBTQ issues because it was considered pornography and you could get arrested for having it on you. So, we started from being literally illegal and we’ve grown from there to where we are today. I also think that period is super significant because our first editor, Phil Price was a huge activist and someone who really took a stand in the beginning.

We believe there is a need to invest in preserving Colorado’s LGTBQ history by making the entire OFM collection available to the public. In order to make this resource fully and freely available online, more funds need to be raised. There are over 40,000 more pages of OFM that need to be digitized and indexed, so that the content can be made freely searchable and discoverable online for anyone, anywhere, anytime. If you would like to contribute to this effort you can make a tax-deductible contribution through the CHNC support page found here. Make sure to use the drop down menu to select OUT FRONT Magazine.

This endeavor between CSL and HC of digitizing OFM is fueled by a common belief that this portion of Colorado history and the voice of the people it represents is in critical need of saving for posterity and should be made easily accessible to the state’s population, as well as those who share an interest in LGBTQ history.

OUT FRONT is a part of the history of our state, and I think it is important to recognize and give space for different populations. It’s part of our total story, so it’s great to have another piece of that story captured in a way that generations can go back and look at that history being told in a moment in time. I’m really excited about the fact that we’re doing this, and I would love to have as much diversity in our collection in telling our state’s story. […]I’m excited that this is going to be out there in the landscape of resources for students, and students of life, who want to go back and learn about this history. Where else would you find this extraordinary content? – Nicolle Davies, State Librarian