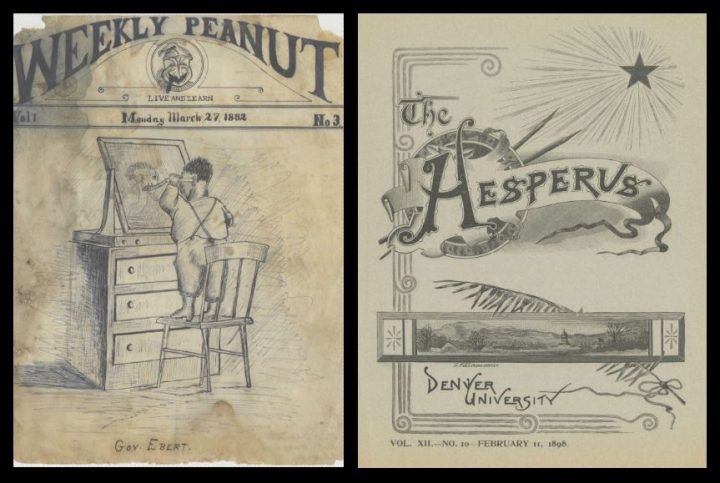 As our list of university newspapers continues to grow, the Colorado Historic Newspapers Collection is pleased to welcome some very special additions to our online catalog. The Weekly Peanut and The Hesperus, the University of Denver’s first and second (respectively) student newspapers are now available at ColoradoHistoricNewspapers.org and they are even more unique and interesting than we could have hoped! While they both offer a glimpse into the life of DU students at the close of the 19th Century,each paper has a voice and a style that makes it truly one of a kind.

The Weekly Peanut was first created in 1882, just 20 years after the University’s founding, by students George Manly and Clark Winsor. While the Weekly Peanut perfectly captured the silliness and sarcasm common to college students of any era, the paper was quite unique in one very obvious way: all articles and illustrations were done by hand. Readers can now take in the detailed account of one student’s vacation to Santa Fe in his own elegant script or read the description of a student’s prank on his professor in his rough, but personalized hand. But don’t worry about deciphering any Victorian cursive, we’ve transcribed each issue, so you won’t miss a word! And while you might visit for the stories, you’ll stay for the illustrations. The Weekly Peanut illustrators didn’t pull any punches in their depictions of fellow students, school facilities, and even professors. Even though it only produced four issues (of which we have three), the Weekly Peanut is truly one of the gems of our CHNC catalog.

Though it began only four years after the final issue of the Weekly Peanut, DU’s second student newspaper, The Hesperus, depicts an image of student life that could not be more different. Issues of The Hesperus feature lofty poetry, profiles of important political and cultural figures, and meditations on morality that remind readers that, at that particular point in time, the University of Denver was still very much a Seminary College. Even so, The Hesperus depicts a distinctly progressive college atmosphere in which co-education of the sexes and outspoken political engagement were expected and encouraged. The Hesperus ran for 12 years before competition from the Clarion, DU’s student paper still in print today, shut down its presses, but its mark on the University’s history remains. 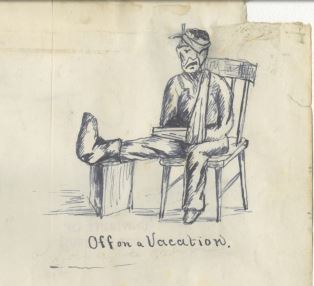 The Weekly Peanut and The Hesperus, though vastly different in their style and concept of “news,” together give readers a fuller understanding of what life was like for university students in Denver at the end of the 19th Century. Whether it is a less than flattering sketch of an unpopular professor or in-depth look at a deeply biblical lecture, both the Weekly Peanut and The Hesperus are invaluable pieces of Colorado History. Come check out both papers at ColoradoHistoricNewspapers.org for yourself and make sure to check back often, as we’re adding new issues and titles all the time!