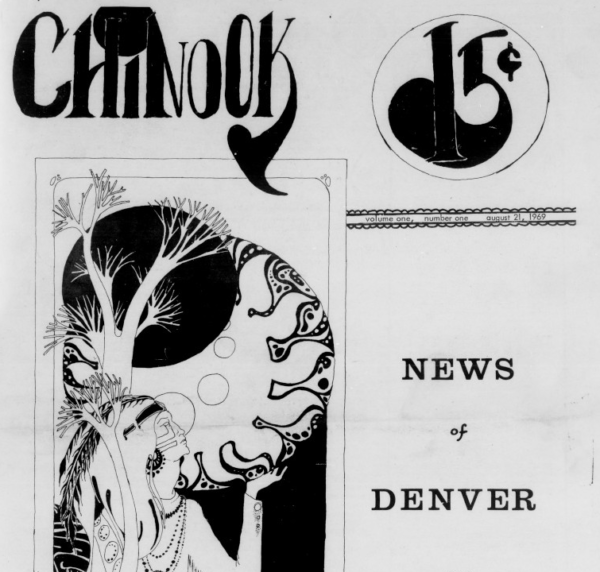 I might have extolled the virtues of the Colorado Historic Newspapers Collection’s (CHNC) diverse titles once or twice before, and this month’s Window to History is no exception. Today, we consider the “underground” newspaper Chinook, which would merge in 1972 with Boulder magazine to become The Straight Creek Journal. Both Chinook and The Straight Creek Journal are included in the CHNC in their entire runs, all told, covering some of 1969 through 1980.

This turning point in history comes at the end of that most important decade – the Sixties, of course, saw the birth of counterculture, which included a proliferation of underground newspapers. To generalize, that groovy decade is not unlike Chinook itself: in turns lighthearted and deadly serious, its restlessness is embodied in elaborate illustrations (some not really safe for work) and far-reaching content.

Full disclosure: Chinook is a true underground paper in that it’s not always too sophisticated (the appropriate journalistic gravitas was afforded to its later iteration, The Straight Creek Journal, which looks – on the face of it – like a normal newspaper, but considered itself to be an “alternative” publication, or, just aboveground). Chinook’s homemade-ness though, I think, is a major strength. Chinook is deliberately funny, self-conscious, a little bit silly in the best of ways, riddled with typos, but forthright about its agenda: subverting the Man (obviously), pushing for the underdog, living alternatively, being a bit outrageous, all while keeping in touch with the cosmos. This is a window into a very specific history.

Volume 1, Number 1, of Chinook, published August 21, 1969, features a “survival” column on page 2 with contacts that will provide such services as:

(ACLU) The American Civil Liberties Union of Colorado has filed a civil suit in U.S. District Court in Denver to stop illegal arrests and harrassment [sic] of people with long hair and unconventional dress. The suit, filed by ACLU attorneys Robert Carr and Peter Ney, charges that the class of people referred to as ‘hippies’ have been subject to illegal arrests, frisks, searches and detainment by Denver police during the past two years. Jeffrey C. Dugger, 23, a Vietnam veteran, and David Zamora, 18, are the plaintiffs in the class action, filed on behalf of themselves ‘and all others similarly situated.’

The rest of the first issue introduces columns that will become standard, such as the music reviews section, beginning with a review of Joan Baez at Red Rocks, where there was a not-so-subtle infiltration by police:

The physical process of going to a concert at Red Rocks has always been distinctly pleasant. One can leave behind the heat of the city and its problems, and climb up to the amphitheater for a few hours of music and escape. My arrival at the Joan Baez concert, however, has left me with a different memory, one of bitterness, of ridiculousness, of disgust- – the label does not matter but the fact is that the Denver police department was at the root of it.

There was also a feature on Timothy Leary’s campaign against one Ronald Reagan for California governor. (Indeed, Chinook (and its successor) often featured or discussed high profile counterculture icons.) The article begins:

(editor’s note: We hear that Dr. Leary’s recent arrest for contributing to the delinquency of a minor was very phony, and that he was not even booked.)

Dr. Leary’s campaign got a fast start with the psychedelic high priest holding mass rallies, press conferences and discussion sessions in smoke-filled rooms. While he was in town, Leary taped material for at least 5 TV shows. ‘Governor Reagan, you cannot stop the future with guns and Jails,’ the teacher challenged. ‘Wake up and look around. We, whom you seek to imprison, are the happiest, healthiest, handsomest, most humorous folk around. And we intend to show in the gubernatorial election of 1970 that we, the peace-loving, fun-loving, are the overwhelming majority.’

Chinook and The Straight Creek Journal are delightful in their entirety, doubtlessly in anyone’s top ten windows to Colorado history. For further reading, check out Chinook‘s coverage of one Vietnam war protest at the Colorado capitol, and spend some time with Straight Creek Journal’s always colorful (sometimes terrifying) classified ads, the kind of ads that leave you asking yourself, I wonder what became of that... 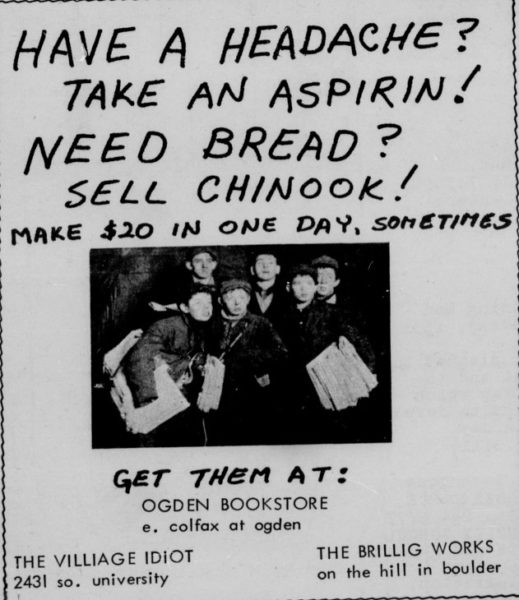