The first Colorado cannabis law appeared on the books exactly one hundred years ago.  In 1917, the Colorado Legislature passed a law “to declare unlawful the planting, cultivating, harvesting, drying, curing, or preparation for sale or gift of cannabis sativa, and to provide a penalty therefor.”  Violation of this law was a misdemeanor and the penalty was “a fine not less than ten nor more than one hundred dollars” and/or “imprisonment in the county jail not more than thirty days.”  The penalty was bumped up to a felony in 1929 and by 1937 the punishment had grown to “imprisonment in the state penitentiary for not less than one year nor more than ten years.”  The Colorado Year Book 1937-38 discusses the 1937 law: 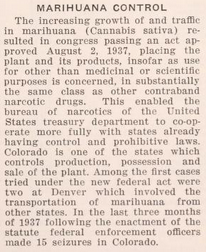 The legalization of medical marijuana was added to the State Constitution in 2000.  However, a 1927 law shows that druggists were allowed — with a prescription from a licensed physician — to dispense no more than one ounce of marijuana in pharmacies.  Colorado law again addressed medical marijuana in a 1981 law “concerning the therapeutic use of cannabis.”

For further resources search the online Colorado Session Laws or our library’s web catalog, or contact our library for information.