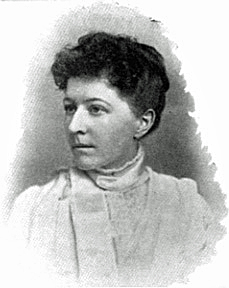 Where: Born in Montana, moved to Denver

Why Important: Prominent journalist, suffragist, activist in the temperance movement. She was known as ‘the Susan B. Anthony of Colorado’ for her hard work in promoting women’s rights.

Ellis Meredith was born in Bozeman, Montana in 1865. Her mother, Emily R. Meredith was a well-known suffragette. Ellis took up the cause of getting women the right to vote, like her mother. Ellis wrote for the Rocky Mountain News. Her activist viewpoints made people in the community take notice.

Ellis wrote about women’s rights. She wanted women to be treated equally and with respect. She also supported the temperance movement. People, like Ellis, who supported temperance, wanted to ban the use of alcohol.

Ellis had the opportunity to travel to Chicago for the World Exposition in 1893 and meet with Susan B. Anthony, one of the most famous women’s rights activists in the entire country. In 1893, Colorado women were granted the right to vote. Colorado became the second state to grant suffrage.1“Woman’s Suffrage Work.” Colorado Transcript, August 2, 1893. CHNC  Ellis’ campaigning and years of hard work had paid off!

However, her place in politics did not end there. In 1903, Ellis was elected as delegate to the Denver City Charter Convention. She also served on the Democratic Party State Central Committee and then the City Election Commissioner.2 “Civic Charter Ticket Elected.” Range Ledger, June 4, 1903. CHNC  In 1904, she spoke in front of the U.S. House of Representatives to campaign for national women’s rights.3“Colorado Women Describe the Benefits of Suffrage.” Creede Candle, February 20, 1904. CHNC  She called for the national government to make an amendment to the Constitution providing women the right to vote. Then in 1917, she worked in Washington, D.C. with the National Democratic Headquarters. People who looked up to Ellis called her the ‘symbol of the Progressive West.’

During all of her campaign work, she found the time to write four books. She died in November of 1955. She was ninety years old.