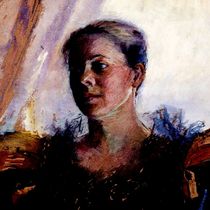 Where: Denver and Evergreen, CO

Why Important: Devoted her life to arts and culture in Colorado

Anne Evans was born to one of Denver’s pioneering families. Her father, John Evans, came to Denver from Illinois in 1862 and served as Colorado’s second Territorial Governor,1“Daily Evening News.” Rocky Mountain News, May 27, 1862. CHNC appointed by Abraham Lincoln. Anne’s brother William served as President of the Denver Tramway Company (which ran the streetcars in Denver). John and William were both involved in railroads as well.

As a child, Anne was a tomboy, preferring to spend time up at the family’s ranch near Evergreen. There she could run and play, while in Denver she had to be a proper young lady. Even as an adult, Anne spent as much time as she could up on the family’s ranch.

As she grew up, Anne became very interested in arts and culture. She studied art in Europe and for the rest of her life collected many artworks, her favorites being Native American pottery, weaving, and baskets. She donated a large collection of this art to the Denver Art Museum. Anne also served on the Denver Public Library Commission.

Anne also enjoyed the theater. She would host plays at her cabin on the ranch. One of her most significant achievements is that she helped to found the Central City Opera House Association with her friends Ida Kruse MacFarlane2“‘Barber of Seville’ and ‘Orpheus’ Feature Tenth Annual Central City Play Festival.” Steamboat Pilot, July 3, 1941. CHNC and Edna Chappell. Anne and her friends worked hard to ensure the restoration of the 1878 Central City Opera House3“Josephine Antoine to Sing in Opera at Central City.” Steamboat Pilot, May 30, 1940. CHNC and started an annual summer opera festival there that continues to this day. The Central City Opera’s first performance, Camille, in 1932, starred Lillian Gish, a famous movie star of the day.

Anne never married or had any children, but she lived with her brother William’s family in a house you can still visit today, the Byers-Evans House at 1310 Bannock Street in Denver, which has been restored as a museum.