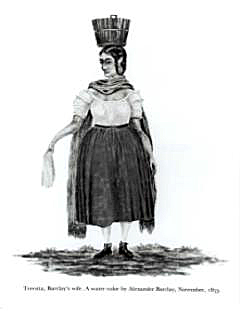 Where: Born in Taos, New Mexico, she moved to Mora, New Mexico and Fort El Pueblo in Colorado. She eventually died in the Arkansas River Country.

Why Important: Sandoval was a pioneer. She was one of Colorado’s many little-known women who helped pave the way for generations to come in the West.

Teresita Sandoval was born in 1811 in Taos, New Mexico. When she was seventeen, Sandoval married Manuel Suaso. By the time she was twenty- three, she was the mother of four children: Juana, Cruzita, José, and Rufena. The family moved to Mora, New Mexico. They went to settle land they received from the Mexican government.

In Mora, Sandoval met a man named Matthew Kinkead. Sandoval and Kinkead decided to leave Mora with her children. They moved north to the American side of the Arkansas River.1“News from the Plains.” Rocky Mountain News Weekly, December 1, 1859. CHNC  The family raised livestock, corn, and other crops on their homestead.

In 1841, the Sandoval-Kinkead family moved to a new trading post called Fort El Pueblo. From the very beginning, Sandoval and Kinkead helped build and run the fort. It was a busy place. Trappers, traders, settlers, and Native Americans all met to negotiate and do business there. Buffalo hides, fur pelts, jewelry, metal tools, and food exchanged hands at the fort.

Adventure at the fort was endless. Sandoval knew and worked with some of the most famous characters on the western frontier. Life here was filled with hard labor, extreme weather, and retaliation by the many Plains Indian warriors defending their traditional hunting grounds.2“Correspondence.” Rocky Mountain News Weekly, November 10, 1859. CHNC

A few years after moving to the fort, Kinkead moved to California. He took the couple’s son, Juan, with him. Sandoval was on her own once again. She went to live with her daughter Cruzita. Cruzita and her husband, Joseph, had a ranch in the Arkansas River country called Casa Blanca. Here Sandoval stayed for the rest of her life. When Cruzita’s husband died, Sandoval took control of the property. She prevented the valuable lands from falling into the hands of rival cattlemen. Sandoval died in 1894 after a long life of toil and achievement. Teresita was a pioneer in every way.