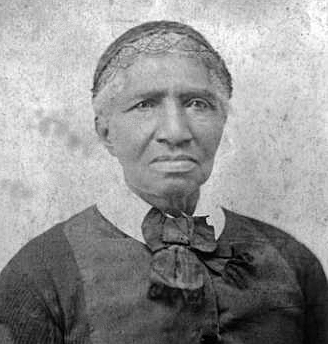 Why Important: One of the first African-American women to settle in Colorado and became a very successful business woman.

Clara Brown was probably born into slavery in Virginia around 1800. Wealthy white southerners who “owned” Clara often auctioned her to the highest bidder as if she were a horse to be sold. Each time she was bought, she would have to move, sometimes even to a different state. Clara married when she was eighteen, and later gave birth to four children. Tragically, all of her children and her husband were sold to different people across the country. She vowed to work for the rest of her life to reunite her shattered family. Clara worked as a domestic servant until 1856 when her “owner” at the time, George Brown, died. Fortunately, his family helped Clara achieve her freedom, and she could begin the search for her missing children.

Hearing that one of her daughters, Eliza, may have moved to the West, Clara headed in that direction. She had money to travel, but black people at the time were forbidden from buying stagecoach tickets. Instead, she convinced a group of prospectors to take her with them. On their way to Colorado in search of gold, she would work as their cook. The journey was long and rough and Clara had to walk alongside the wagon for much of the nearly 700-mile trek. Once in Denver, Clara was unable to find her daughter. She decided to travel with gold seekers to Central City in the summer of 1859. The town was made up of gold mines, small stores, saloons, and shacks for miners and their families.1“Mining News.” Rocky Mountain News Weekly, September 29, 1859. CHNC  Clara was one of the first African-American women to reach the gold-mining towns of Colorado. 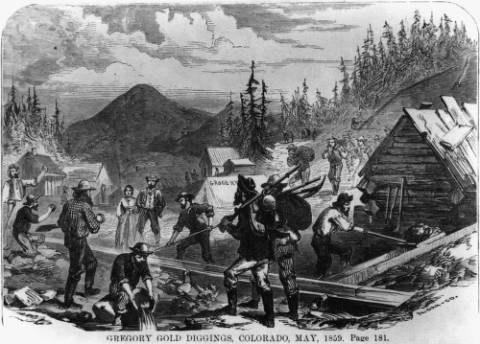 Clara’s two most important goals were to make enough money to live independently and to find her family. She figured that accomplishing the first goal would help her with the second. Clara started by opening a small laundry service for the gold miners of Central City. The business was very successful, and she began saving her money. To make even more, she cooked, cleaned, and catered special engagements. By the end of the Civil War in 1865, when most black people were just gaining their legal freedom, Clara had saved ten thousand dollars. This was an astonishing amount of money. With this wealth, she invested in mining claims and Colorado real estate. She could now support herself very well. A Hub of the Community Like most of the small black population of Colorado, “Aunt” Clara saw the importance of living within a strong community. In Central City, her business and her home became community hubs. Sick or injured miners, regardless of race, would often turn to her for help. Clara gave them a place to recover and cared for them until they were able to return to work. She also helped those who were homeless and needed a place to stay. Pregnant women in town often wanted Clara to help deliver their babies. She provided many of these services for free to those who could not afford them. Clara Brown was a Presbyterian, but she did not discriminate against other faiths. She gave money and time to four different churches in town. As she had done in Denver, she also helped start the first Sunday school program in town. She used her home as the classroom. While her faith was strong and her finances secure, Clara was still missing something…her family.

Once she had saved enough money, Clara Brown began the hunt for her family. She traveled to Kentucky and Tennessee in search of her loved ones. Though she did not find her children or husband, she did not return empty-handed. Clara discovered other relatives on her trip, and she paid for them to move to Colorado. She also helped other freed blacks to move here for many years. When they arrived, she helped them find jobs in their new home.

In 1879, Clara acted as an official representative of Colorado Governor Pitkin to Kansas. Many black people had escaped from the South and moved to black homesteads in Kansas. This was sometimes called the “Black Exodus,” and these people were called “Exodusters.” Governor Pitkin sent Clara Brown to Kansas to try to persuade some of them to move to Colorado. Many jobs were available in Colorado due to mining strikes and labor shortages. Clara delivered Governor Pitkin’s invitation and donated some of her own money to support the new black communities.

In spite of all her successes, disaster was just around the corner. In 1864, a great flood swept through Denver and destroyed much of the town.2“The Great Flood in Denver.” Daily Mining Journal, May 23, 1864. CHNC The papers proving that Clara Brown owned property there were lost. In 1873, Clara’s home and several of her other properties went up in flames in a huge fire in Central City.3 Clara now had nothing to show for all her years of work, but people in the community came to her rescue. Someone even set her up in a cottage in Denver.

In 1882, when Clara was about 80 years old, good news brought fresh hope of finding her daughter. She received word that a black woman named Eliza lived in Council Bluffs, Iowa. This woman was born about the same time as Clara’s child, Eliza. She had been taken from her mother and sold to another family, and she even looked a bit like Clara. With money from her friends, “Aunt” Clara immediately traveled to Iowa to find out if this person could indeed be her Eliza. They met in Iowa, and the two joyfully discovered that they were in fact mother and daughter! The story of their reunion was widely published in newspapers in Colorado and throughout the Midwest. After forty-seven years of separation and searching, Clara’s dream had finally come true. Eliza was the only child Clara ever found, and the two returned to Colorado where they lived until Clara’s death.

“Aunt” Clara Brown passed away in her sleep just three years after being reunited with her daughter.4“Colorado Condensed.” Castle Rock Journal, November 4, 1885. CHNC Crowds flocked to her funeral. The mayor of Denver and the governor of Colorado even attended the ceremony. The Colorado Pioneer Association made Clara Brown their first African-American member, and funded her entire funeral.5“Items in Brief.” Colorado Transcript, November 4, 1885. CHNC

Clara Brown’s name and reputation have lived on in the years since her death. A chair in the Central City Opera House was installed in her name in the 1930s. This is an honor reserved for well-respected community members. In 1977, Clara’s life and achievements were commemorated with a stained glass portrait of her in the state capitol building. She also has a plaque on the St. James Methodist Church in Central City, which explains that her home served as the first church in the area. An opera about her life, called Gabriel’s Daughter, debuted in Central City in 2003. People say that Clara Brown went from being a slave to being an angel, but neither word is accurate. She was an experienced black woman who lived with purpose and passion. She recognized the power of community and in building relationships. She found her way out of a life of enslavement to establish a new life in Colorado. Her success in business gave her the chance to share her wealth with friends and family. She worked to develop the black community in Colorado. The discovery of her daughter, Eliza, turned her lifelong dream into reality. In her own time of crisis, favors and kindness were lovingly returned to her.