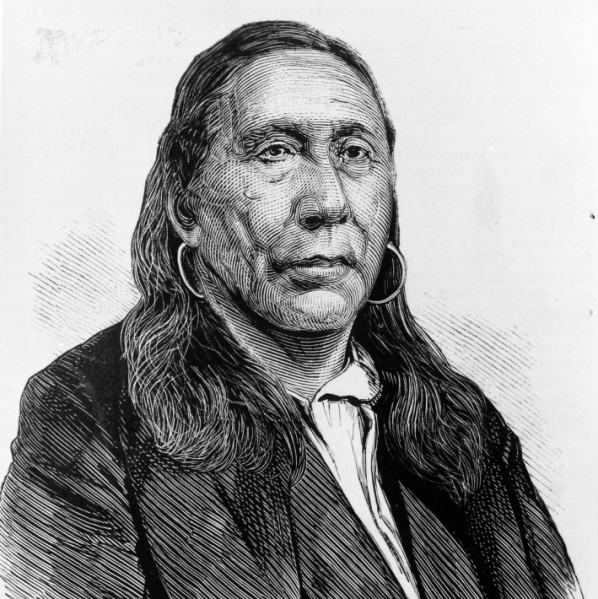 Where: Colorado and Oklahoma

Why Important: This Chief sought peaceful relations between Native Americans and whites even amidst the Sand Creek Massacre.

Little Raven was born around 1810 on the Plains near Nebraska. He negotiated peace between the Southern Arapaho, Cheyenne, Kiowa, Comanche, and Plains Apache in 1840. He was also known to welcome white Americans into his Denver tipi during the Gold Rush.

Despite Little Raven’s efforts, peace was hard to maintain 1“Indian War.”Western Mountaineer, June 28, 1860. CHNC. The Fort Wise Treaty of 1861 forced the Arapaho away from their homes. Although many Arapaho chiefs did not sign the treaty, Little Raven did sign in hopes of maintaining peace. However, he soon discovered that whites were violating the treaty. The Sand Creek Massacre furthered threatened any possible peace.

The Massacre occurred on November 29, 1864. Several bands of Arapaho and Cheyenne Indians were told to camp near Fort Lyon by the  U.S. Government. Unjustly, Colonel Chivington ordered his troops to attack the peaceful Indians. When the violence ended, over one hundred Native men, women, and children had been slain by the soldiers. Little Raven and his band of Arapaho survived the massacre, but only because they camped far away from the other Cheyenne and Arapaho.

Little Raven traveled to Washington D.C. and spoke at the Cooper Union for the Advancement of Science and Art 3. President Grant even offered him a peace medal; however Little Raven said he had no peace talk to make because he had never been at war with whites.

He died in 1889. Little Raven Street, between 15th and 20th Street in Denver, near the South Platte River, commemorates the Arapaho chief.