April 23, 1859 proved to be one of the most exciting days in the history of Colorado journalism. On this day the citizens of the newly established Denver City were anxiously awaiting the arrival of the city’s first newspaper issue. The young frontier town, organized just five months prior, was bustling with 150 houses, one hotel with five more soon to be complete, five stores, a bakery and a butcher, as well as two saloons.  All that was missing was a newspaper – a defining aspect of any well-respected frontier town.

Two journalists, John L. Merrick and William Byers, were vying for the honor of publishing Denver’s first newspaper. Merrick was the first to arrive and set up his printing equipment. Byers arrived soon after with printing equipment purchased from a defunct Nebraska newspaper and pulled to Denver by oxen.  Ultimately Byers beat Merrick, printing the first issue of the Rocky Mountain News a mere 20 minutes before Merrick printed the first and only issue of the Cherry Creek Pioneer.  Defeated Merrick sold his press soon after and went to the gold fields to seek his fortune. 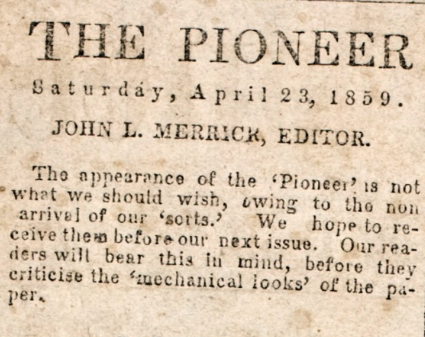 Today, April 23, 2021, we celebrate Merrick’s Cherry Creek Pioneer marking its front page CHNC’s 2 MILLIONTH page!  The Colorado Historic Newspapers Collection (CHNC) began in 2003 with just over 97,000 pages. Since then the addition of new titles and new issues has been supported by a large and dedicated network of cultural heritage institutions from across the state who are committed to providing free and open access to their local history and therefore the State’s history. 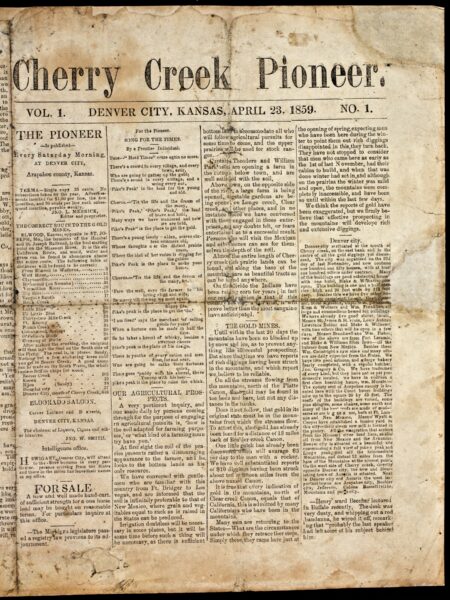 Unlike Merrick, we are not ready to throw in the towel and we are far from done. We and our partners will continue to support Colorado’s historic newspapers. The last million pages brought to light numerous college and university papers, Colorado street papers, over 100 years of the Steamboat Pilot – the longest continuous run included in CHNC – and many many new titles from around the state. We can’t wait to see what the next million pages bring!

If you have question about CHNC we would love to hear from you.  Feel free to contact me, Leigh Jeremias, at ljeremias@coloradovirtuallibrary.org.