Where: Born and lived in southeastern Colorado 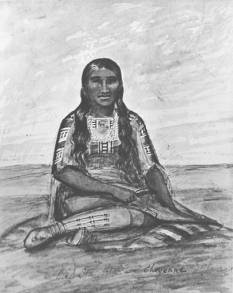 Owl Woman, known as Mis-stan-sta in Cheyenne, was probably born in what is now southeastern Colorado in the early 1800s. White Thunder, her father, was “keeper of the arrows.” This honor made White Thunder a high priest. He was one of the most respected and important men among the Cheyenne. Since she was his daughter, Owl Woman was also highly respected.

White Thunder decided that Owl Woman should marry one of the most powerful men on the plains, William Bent. Bent had built a fur-trading fort on the Arkansas River in 1833. He was friendly with the Cheyenne people. Bent even learned to speak their language. In 1835 Owl Woman married William Bent. Bent’s Fort1Rocky Mountain News Weekly, November 14, 1860. CHNC was built of adobe bricks made with mud, straw, wool, and water. Trappers with pelts came from the mountains and Indians came from the plains with their goods. In exchange for these items, Bent would trade flour, sugar, coffee, calico, tobacco, whiskey, wine, tea, fur, and guns.

Owl Woman helped at the fort, and she was often in charge of Bent’s supply trains. The fort would become the largest and most popular trading center along the Santa Fe Trail.2“Bent County.” Las Animas Leader, September 25, 1874. CHNC Preferring the outdoors, Owl Woman frequently stayed just outside the fort walls in her Cheyenne village. The couple had four children, Mary, Robert, George,3“A Happy Warrior of the Old West.” Eagle Valley Enterprise, June 15, 1928. CHNC and Julia. The children learned about Cheyenne ways from their mother’s mother, Tail Woman. When they were older, their father sent them to schools in St. Louis, where he had been raised. By the time they were grown, the Bent children could live in either world.

Owl Woman died shortly after giving birth to Julia in 1847. She had lived with her husband between the Cheyenne and the American worlds for many years. Instead of being buried, her body was placed on a high platform, exposed to the weather and birds, so that she could quickly return to the earth. This was the Cheyenne way.