Where: Born in Kentucky, died at Fort Lyon, Colorado. 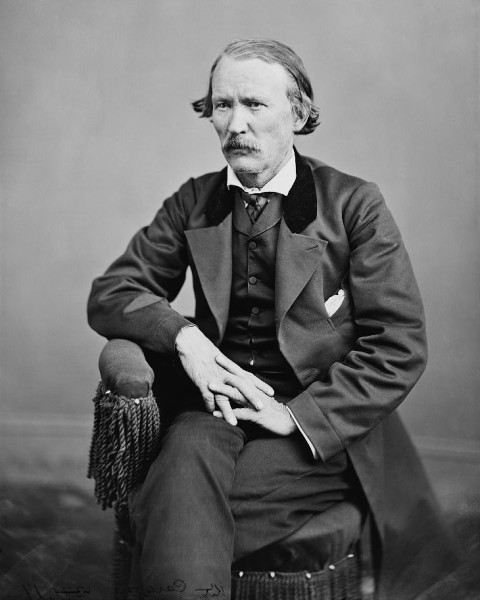 Why Important: Kit Carson guided many important expeditions into the territories of the American West.

Christopher Houston Carson was born in Kentucky on Christmas Eve 1809. Carson grew up on a family farm in Missouri. From a young age people called him “Kit.” The nickname stuck. Carson was learning to be a saddle- maker. But he craved adventure. So, he ran away from home when he was seventeen. Carson headed west to join trappers in the majestic Rocky Mountains.

By the time he was twenty-six, Carson had traveled the entire American Southwest with trappers, traders, and explorers. Mountain men such as Carson trapped and hunted wild animals. They hunted beaver, fox, mountain lion, and black bear in the wilderness. Carson made a good living as a trapper.

Carson also learned from the local Indians. Besides speaking English, Carson was fluent in Spanish, Navajo, Apache, Cheyenne, Arapaho, Paiute, Shoshone, and Ute. He even knew the sign language used by many Plains Indians. Carson helped support peaceful relations with the Cheyenne and Arapaho tribes as an Indian agent. Carson was known as an Indian fighter who fought only to protect forts and punish attackers.

He was an admirable and fair-minded Indian agent1Rocky Mountain News, March 20,1868. CHNC. Many Indians respected him.

In the following decades, Carson’s reputation took on a life of its own. Carson’s real adventures included hunting trips in remote parts of the West, finding safe passages through Indian lands, and protecting trade routes across the plains2“The Weekly News.” Rocky Mountain News Weekly, January 29, 1868. CHNC

Carson died on May 23, 1868 at Fort Lyon, Colorado3“Death of Kit Carson.” Colorado Transcript, June 3, 1868. CHNC. Carson had eight children with his third wife, Josefa Jaramillo. Many of their descendants still live in the Arkansas Valley in Colorado. He is buried in Taos, New Mexico next to his wife. Carson is praised for his valuable service to the United States. He became known as the greatest mountain man of all time. As one historian wrote, “Carson was a pretty decent chap and he did have some rather exciting adventures.”