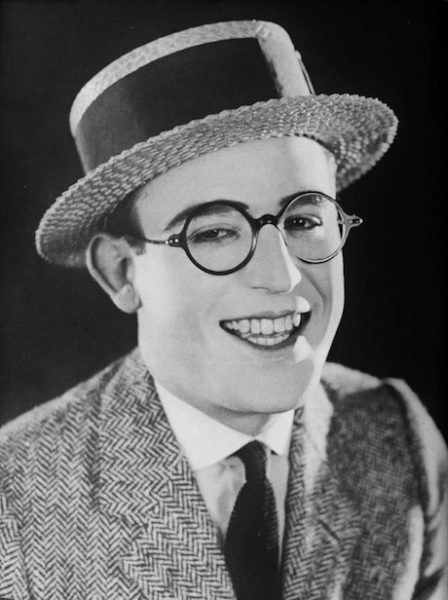 Where: Born in Nebraska, moved to Denver, and later to California

Why Important: One of the most influential comedians of the silent film era

Mary Sabin, a science teacher at Denver’s East High, remembered Harold Lloyd as a very quiet boy. Lloyd turned this gift of understatement into a long and distinguished career as a silent film actor. When he was only twelve years old, he played “Little Abe” in a local production of Tess of the D’Urbervilles. High school stage productions attracted Lloyd to the theater business before graduation.

Between 1917 and 1947, Lloyd made more than 200 comedy films, both silent and “talkies.” His best known role was his “Glass character,” a resourceful, success-seeking, go-getter, who was perfectly in tune with 1920s America. The image of Lloyd hanging from the hands of a clock high above the street in Safety Last1Haswell Herald, October 25, 1923. CHNC  is one of the enduring images in all of cinema history.

Lloyd formed his own film production company2“Will be Carpenter at Lloyd Movie Studio.” Daily Journal, October 31, 1922. CHNC  and was a founding member of the Academy of Motion Picture Arts and Sciences (which was started by another East High grad, Douglas Fairbanks, Sr.). In the 1940s, he directed and hosted a radio series called The Old Gold Comedy Theater.3”Star Dust.” Eagle Valley Enterprise, December 1, 1944. CHNC

Harold Lloyd received a special Academy Award and he has two stars on the Hollywood Walk of Fame. He was considered one of the three comedic geniuses of silent film along with Buster Keaton and Charlie Chaplin.