The end of June, between 1870-1882, was a hot time for railroad milestones in Colorado. Reaching those milestones were not without hindrances, competition or the possibility of contention between all the various railroad companies.

In 1866, Denver was informed that it would not be on the route of the transcontinental railroad; it would instead be built northward through the break in the formation of the Rockies in Wyoming. Therefore, the main railroad hub before passing the Rockies would be Cheyenne, Wyoming, not Denver, Colorado. This was a tremendous blow to the fledgling city of Denver. However, Colorado, with its extensive system of mines and ore, was a hard Territory to ignore. Nor would Denverites in particular let the area be ignored. Denver remained on the radar of railroad executives of both the Union Pacific and the Kansas Pacific. A representative (the appropriately named George Francis Train) for the Union Pacific, on November 14, 1867 gave a lecture in Denver stating that the town itself should have its own railroad company and construct a line from Denver to Cheyenne. It should only cost $2,000,000. The Denverites were enthused and within three days (with 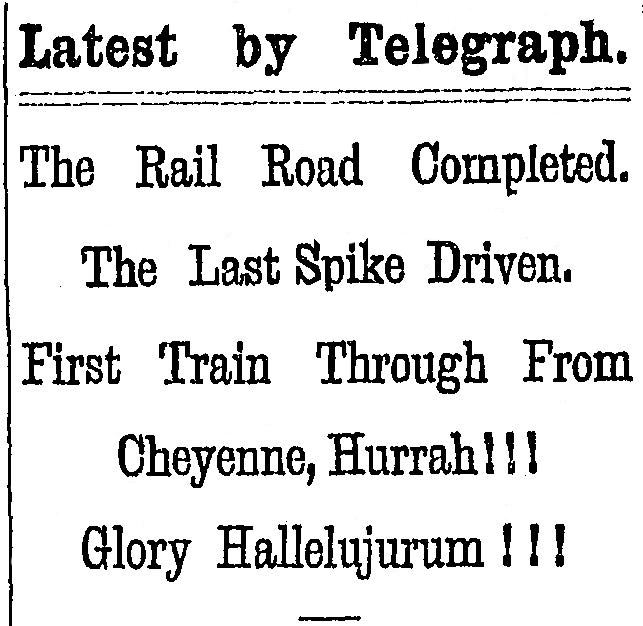 the former Territorial Governor, John Evans at the helm) the Denver Pacific Railway and Telegraph was incorporated and $300,000 raised. The rest of the funding was a bit harder to procure, but Evans eventually persuaded the Kansas Pacific Railroad to grant right of way to their land in Colorado and Wyoming along the route, as well as to assist in financing the building of the road after the Union Pacific’s agreement to provide the iron fell through due to financial hardship. Road work began in May 1868 with a grand celebration, complete music and a keg of beer.1“First Colorado Railroad.” Daily Colorado Tribune, May 19, 1868. CHNC It was completed June 22, 1870.2“Latest by Telegraph.” Daily Central City Register, June 23, 1870. CHNCGeorgetown, in commemoration of the event, bequeathed to Evans a silver spike made from Colorado silver.3“The Silver Spike.” Rocky Mountain News, June 24, 1870. CHNC. There was a fantastic celebration in honor of the road being completed sponsored by the “ladies of the Episcopal Church.”4“Saturday’s Local News Items.” Rocky Mountain News, June 22, 1870. CHNC (Interestingly, Evans had to rescue the spike after the occasion [he somehow got away with simply wrapping a standard spike in white paper to pass for silver], as the men sent to deliver the spike had proceeded to inebriate themselves and had pawned it).

Eight years after the Denver Pacific connected Denver with Cheyenne up north, the Denver and Rio Grande Railroad connected Denver with the south by way of the San Luis Valley and its agriculture and mines. In fact, the DR&G created its own town, naming it Alamosa,5“A Trip on the D& R.G. Pay Car.” Colorado Springs Gazette, July 6, 1878. CHNC in a bend on the Rio Grande river just west of the already established Garland City near Fort Garland. This didn’t seem to faze the Garland residents, who apparently simply moved themselves and most of their buildings to Alamosa.6“Letter from Alamosa.” Colorado Springs Gazette, June 29, 1878. CHNC The narrow-gauge railroad was completed around June 26, 1878 and Alamosa quickly established itself the railroad hub of the San Luis Valley. Unfortunately, the occasion was met with the tragic accident of a fireman (the man who shoveled coal into the furnace to run the steam powered locomotive) being killed on the job.7“General News.” Denver Daily Tribune, June 27, 1878. CHNC There were high hopes for Alamosa to become a city on par with Colorado Springs or Denver. While this accomplishment was not quite met, today Alamosa can boast around 9,500 residents, remains a prominent player in the state’s agricultural industry and provides rides on the historical train route in historical trains.

The early 1880s, brought about the very notable completion of a direct railroad route from Chicago to Denver8Leadville Herald, June 3, 1882. CHNC when the Chicago, Burlington and Quincy Railroad reached Denver on June 26, 1882. The CB&Q Railroad began as the Aurora Branch Railroad in 1862 in an attempt to connect the forty-one miles west of the town of Aurora with Chicago. By the time of the line’s completion in 1864, the railroad had been renamed the Chicago, Burlington and Quincy Railroad due to it incorporating all of those cities with stops along the route. Throughout the next eighteen years, CB&Q expanded westward, first through Iowa, then Nebraska and into Colorado thus initially connecting freight transportation with Denver.9“State Clippings.” Leadville Daily Herald, June 6, 1882. CHNC The first passenger train did not arrive to Denver from Chicago until July 2, 1882.10“State Concentrates.” Montezuma Millrun, July 1, 1882 This expansion into Colorado was not without concern of a potential railroad war occurring between the DR&G and the CB&Q Railroad companies.11“Alleged Combination.” Mountain Mail, June 10, 1882. CHNC A conference was held in Denver in the beginning of June 188212Leadville Daily Herald, June 8, 1882. CHNC  with the hopes of resolving any route or rate conflicts, however, an agreement was not immediately reached. The worry appears to have been unfounded, since “pooling” (definition: a train operating over a track owned by two or more railway companies) became a non-issue for CB&Q.13Mountain Mail, July 8, 1882. CHNC

It seems incredible now to think that without all of the above railroad connections being established that Denver would have become a ghost town on the eastern edge of the Rockies. However, because the town did work together in the late 1860’s to save their status in the region, we are now blessed with a thriving city of approximately 650,000 people. The tenacity of the fortitude one acquires living in Colorado has a long history of being undeterred.