The National Western Stock Show begins this weekend and shall be celebrating its 110th Official year!  In actuality, there were attempts to hold joint conventions of the American Stock Growers’ Association and the National Live Stock Association prior to 1906.

However, the late 1800’s, while less wild than earlier in the century, was still a bit unruly. And thus it was in 1898, when the Associations gathered in January in Denver.

It was due to be quite the affair, and indeed it was, until the last day. The final day celebrated the end of the convention with an absolutely huge barbecue of all types of meat, (even opossum). The Herald Democrat even lists the meat offered. 1The Herald Democrat. January 28,1898. CHNC A “hitch in the get-along” was 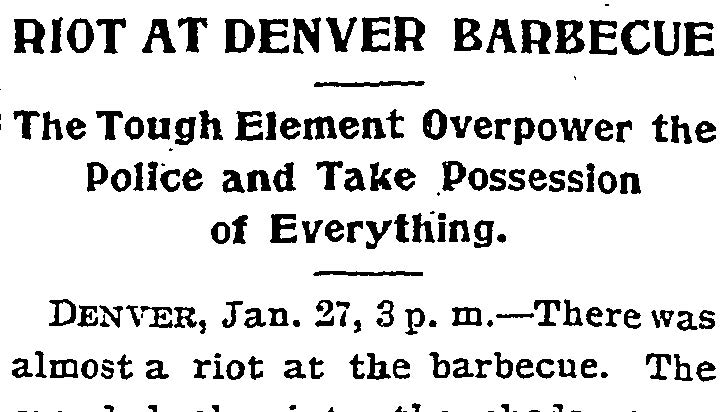 that Zang’s Brewery had already begun serving its product before the grilling was done. What transpired, was a reckless rush for the vittles. The Daily Journal 2“Riot At Denver Barbecue,” Daily Journal. January 27, 1898.CHNCin Telluride aptly described it as a “riot.”

The rowdy incident led to the stock shows being held elsewhere (mainly Chicago) for the next few years. However, in 1906, while Robert Speer was mayor of Denver, the convention once again was held in Denver.  The Park County Bulletin3“Live Stock Show,” Park County Bulletin. February 1. 1906. CHNC and Yuma Pioneer4“Stockmen Unite,” Yuma Pioneer. February 2, 1906. CHNC both reported on the tremendous success of the gathering. 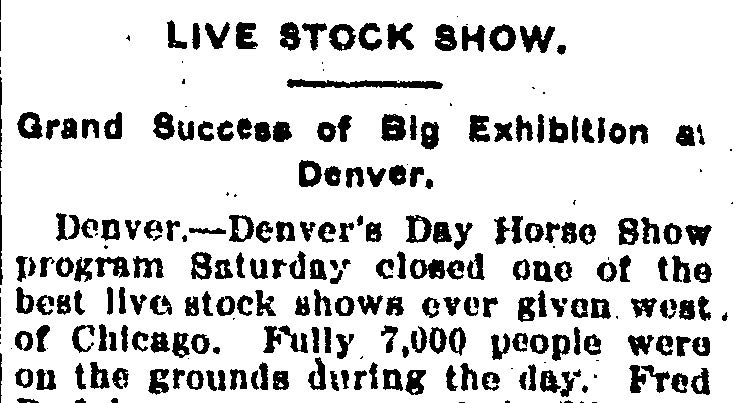 It was determined at the event, due to Denver’s central railroad location heading west being more convenient than Chicago, St. Louis or Omaha, that the convention would remain in Denver for the foreseeable future5“A Western Stock Show,” Daily Journal. January 8, 1906. CHNC.

The National Western Stock Show was quite the social “to-do” in the early 20th century, attracting even the elite of Denver, even though the first few years the events were held in enormous tents near the stockyards. In 1909 the Stadium Arena was completed and many of the festivities were gratefully held indoors away from the typical snowy weather of Colorado in January.

Since then the National Western Stock Show has grown significantly, building more and larger venues, including the Denver Coliseum. In fact, further expansion is still on the agenda in the coming years.

One can always count on the Colorado Historic Newspapers Collection to provide splendid details about long standing annual events here in Colorado!

Want to know more about the National Western Stock Show beyond the newspapers? RMPBS’ Colorado Experience has an episode highlighting the event.

Pomp & Circumstances That are Out of Our Control: Commencement 2020