CHNC has worked with the Salida Regional Library for a number of years to add important Chaffee County newspapers, such as the Mountain Mail and the Salida Mail, to our always growing number of newspapers.  Most recently, the Library funded the addition of 473 issues of the Whitehorn News, 1897-1907.  The town of Whitehorn, originally located in Chaffee County but now part of Fremont County, was formed in March 1897 and is located about 15 miles northeast of Salida.  The town had two newspapers that reported on the activities of the town and the local mines which employed most of its residents.  Today the area that was the town is now private property.

CHNC is also excited to be working with new partners: the Louisville Public Library and the East Morgan County Library District.  The Louisville Public Library received generous funding from the City of Louisville and copyright permission from the publisher to digitize the Louisville Times, from 1942-2007.  This generous support is a testament to the City Council’s commitment to Louisville’s history.  The addition of these years makes the Louisville Times CHNC’s most contemporary title. The first issue of the Times was published in 1913, with the  paper changing hands numerous times over the years until it ceased publication in  2010.  Currently there are 1594 issues of the Times in CHNC covering 1983-2007 but more issues will be added over the coming months. 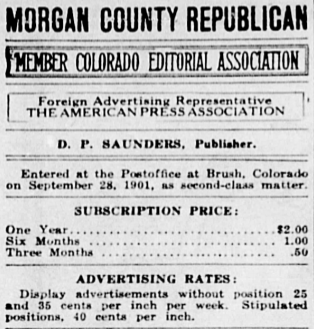 The East Morgan County Library District received a 2017 CHRAB (Colorado Historic Records Advisory Board) grant to digitize historically significant Brush area newspapers.  While the library currently has access to some of these original newspapers, pulling them for researchers is challenging for staff because they are located in a separate building and their fragile state is also a handling concern.  With this grant the library is jump-starting a long term goal of adding their historic newspapers to CHNC, which in turn will make their community history more accessible to a wider audience.  These grant funds along with matching funds from the library supported the recent addition of the Brush Lariat, 1884-1885 and the Morgan County Republican, 1912-1920.  The addition of the Brush Tribune, 1899-1912, will be coming in a few months.

If you would like to learn more about becoming a CHNC partner or how to fund a CHNC project please contact me at ljeremias@coloradovirtuallibrary.org.  We add new newspaper content every few months so don’t forget to check CHNC often. CHNC could not continue to grow without our partners’ dedication to preserving their community history and serving their audience.